My Visit to the Doctor’s Office

Last week I got the news that no one wants to receive while studying abroad: I had contracted a sinus infection here in Spain. In all honesty, the reasons for me becoming ill are probably 100% self-motivated but I was determined to not let it bog me down. After weeks of touring various historical sites, visiting three different countries, and some wild partying on the side, my body’s immune system was depleted. I understand that in the real-world people get sick and the point of this post is not to complain about my misfortune.  My intentions are to describe my experiences in visiting the hospital while in a foreign country and hopefully providing some insight into navigating it yourself.

When I first started feeling a little bit under the weather, I decided that it was better for me to wait to see if I would clear up on its own. This was the mistake that I made. If you start feeling sick while studying abroad, start treating it right away. It’s better to try home remedies or start taking over the counter medicine before the illness gets to the point where you must visit the doctor. After I could no longer deal with the symptoms on my own, I consulted my CIEE program advisors and set up an appointment to meet with a doctor.

Now I know that you are probably instinctively thinking of huge buildings, tons of staff, and lots of medical equipment when I mention visiting the doctor’s office, but this is not the case. In Spain, I got the opportunity to visit a private practice that was contracted by the local hospital. Dr. Fidel Saval is a second-generation doctor and now uses the same office his father used years before. Dr. Saval’s office is located among his family’s apartments in the same building which is now recognized as a historical building by the city of Barcelona. After sitting down in a vintage lounger, the doctor conducted the usual tests and found that I had contracted an infection. Before leaving, we moved to the doctor’s private office so he could write me a prescription. Keep in mind that the entire time I was there it smelled like an antique store due to all the vintage books and paintings that showcased around the room.

Another strange practice I was not prepared for was that doctors in Spain literally write prescriptions for their patients. There is no email or internet involved in the process, rather you take your slip to one of many local pharmacies (marked by a green cross ironically…). Once I arrived at the closest pharmacy, I was pleased to find that drugs are extremely inexpensive here. My amoxicillin was only approximately $6! 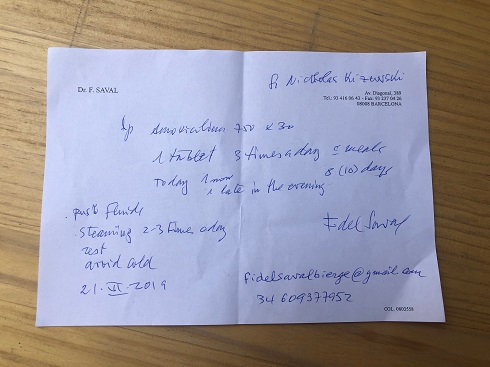 In closing, I just wanted to say that I had a wonderful experience with the Spanish healthcare system and would not hesitate to use it again. While living abroad in Spain, I’ve learned the hard lesson that every day of your program counts. Don’t let a sickness take a day away from you (or a week in my case, lol).

Barcelona Nicholas Kizewski Spain
« Back to news
Back to Top